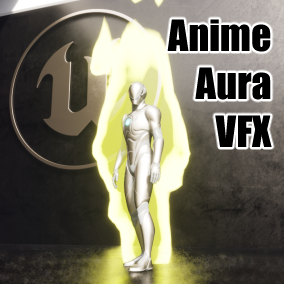 Anime Aura VFX is a set of NiagaraSystem that shows flat shaped aura VFX as seen in animes.

Not a flipbook but particle-based and have these benefits:

-The pose of characters are reflected into the shape of VFX

-Its behaviors and looks can be changeed dynamically

They can be used in place of NS_AuraEffect to shortcut setting parameters.

- Modify parameters / emitters in it

This is recommended because the created NiagaraSystems can be reused (of course).

The good point is that the effect can be previewed in the actual scene.

This part is technical, for those who customizes aura effects.

Reading this may help you to take a more logical approach to achieve the target expression.

A NiagaraSystem in Anime Aura VFX  has an emitter that controls particles (Particle Controller) and one that renders them into texture and shows as a sprite (Sprite Renderer). 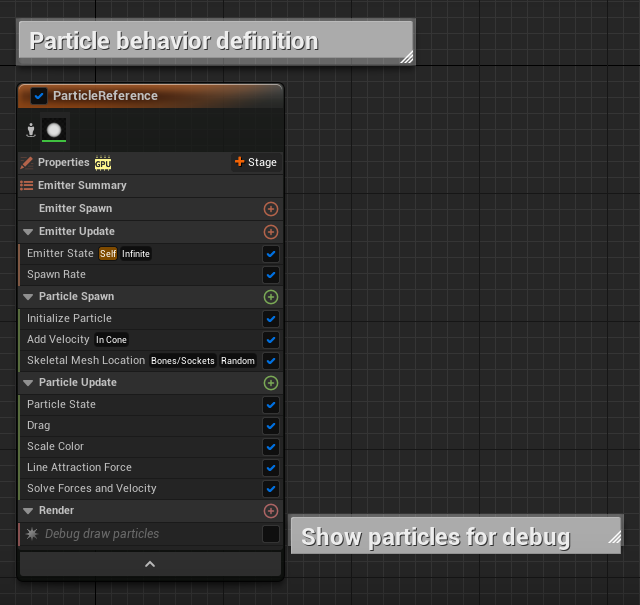 This is almost an ordinary emitter, like Fountain in the template.

But renderer is turned off and particles are not rendered in ordinary way.

Sprite Renderer reads positions and sizes of particles from this emitter.

By modifying this emitter, the behavior of the VFX can be customized (turning the renderer on should be convenient while working).

This can be done as an ordinary VFXs. It's OK to add forces / bursts.

Too many particles can be bad for performance, but Anime Aura VFX doesn't get much benefit from spawning large number of particles. 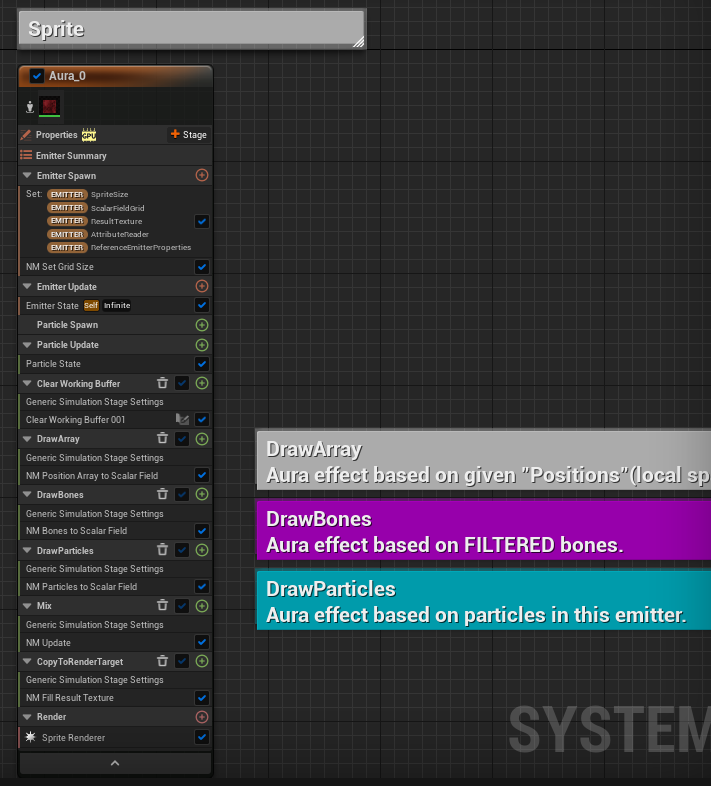 Sprite Renderer reads positions and sizes of particles from this emitter to render them into a texture and pass it to a material that is assigned to a sprite.

If attached to a skeletal mesh, positions of its bones and sockets can be used as virtual particles.

The main part of Sprite Renderer is in the Simulation Stage and it doesn't emit particles.

Since this is a composition of specialized modules, customization is not recommended for those unused to develop Niagara Systems.

But number of parameters are exposed as user parameters to help controlling the amount / size of aura VFX.

Sprite Renderer draws desity map according to the position and the size of particles relative to the view point.

Finally, the density map is blended with the previous frame. 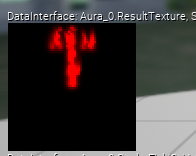 It is shown in the viewport of NiagaraSystem editor.

Since a T-posed skeletal mesh is referenced for previewing, the density map is also T-shaped.

Density map is one dimensional and it is shown red.

Mapping density to color via materials

Final draw color is decided in the material assigned to the sprite, using the value sampled from density map.

Sampling colors from a curve atlas is a typical implementation.

In this case, UVs for sampling from the density map and the sampled density can be processed in the material to give variations in appearance.

This material can also be changed in the NiagaraSystem user parameter, so those who are familiar with handling materials can create their own and achieve a variety of expressions. 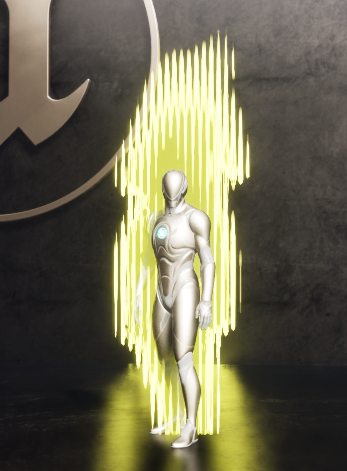 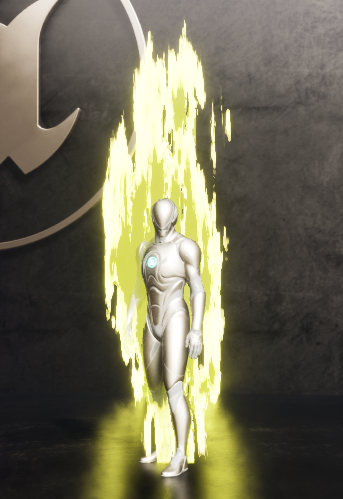 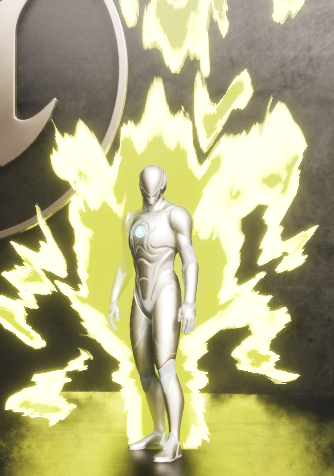 Animi Aura VFX depends on view matrix (camera transform), that means this VFX is not seen correctly from 2 or more viewpoints at the same time. This happens when your application uses scene capture or has multiple viewports (ex. multiplayer by splitting screen).

There is an optional parameter "Custom Viewport" to choose the viewpoint  from which the VFX should be seen correctly(typically a SceneCapture2D will be set).

A "canvas" is filled with "densities" calculated by these effect sources and finally drawn onto the screen with the given material.

Parameters can be modified in the details view of NiagaraComponent. 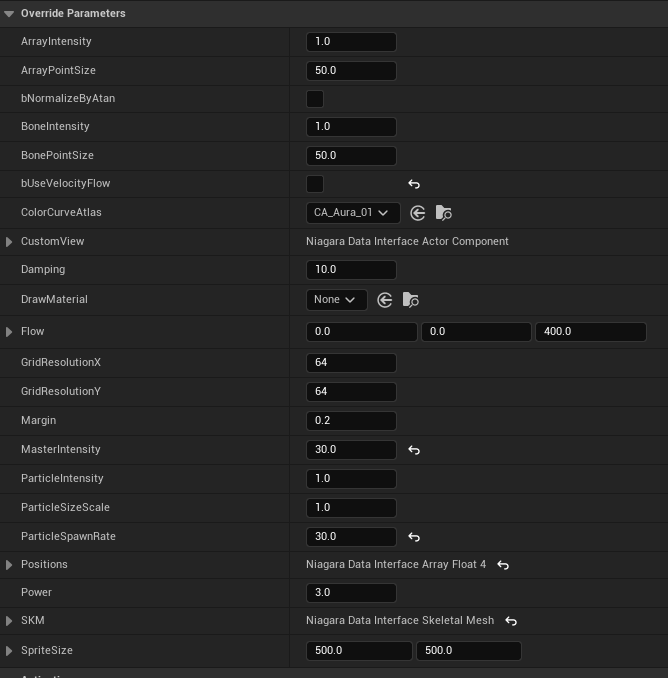 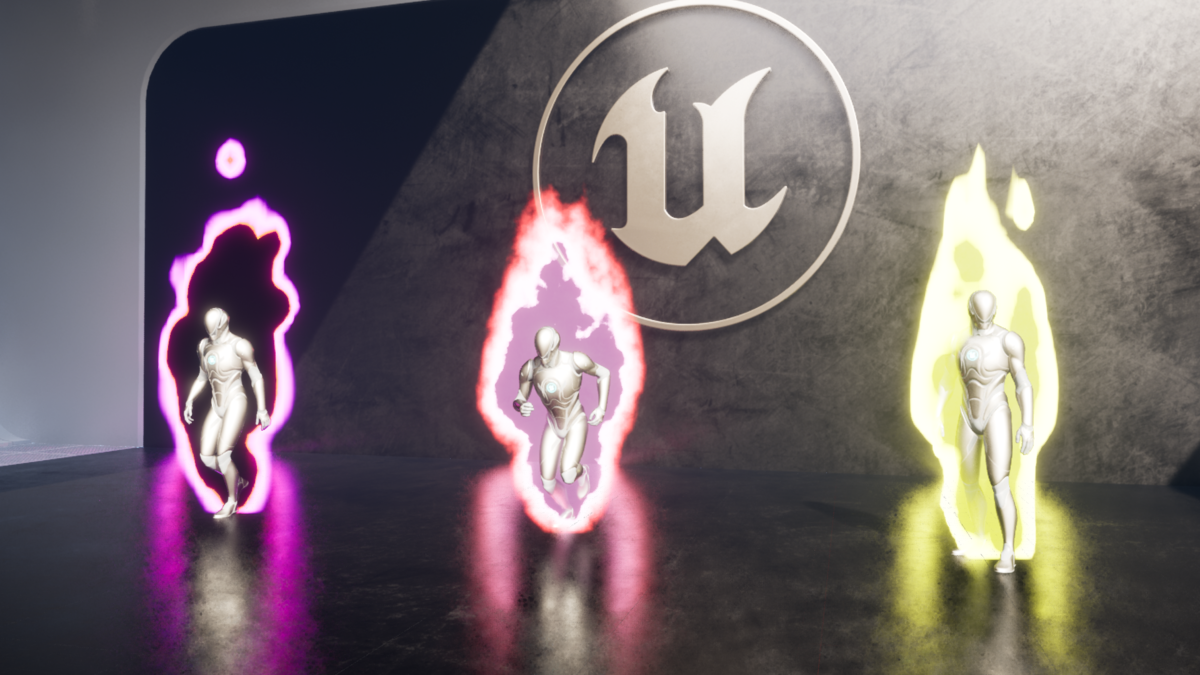 Anime Aura VFX is a particle-based but flat aura VFX as seen in animes.

The advantage compared to (prepared) texture based one is its flexibility.

They can be used in place of NS_AuraEffect to shortcut setting parameters.

Animi Aura VFX depends on view matrix (camera transform), that means this VFX is not seen correctly from 2 or more viewpoints at the same time. This happens when your application uses scene capture or has multiple viewports (ex. multiplayer by splitting screen).

There is an optional parameter "Custom Viewport" to choose the viewpoint  from which the VFX should be seen correctly(typically a SceneCapture2D will be set).

How to open editor: 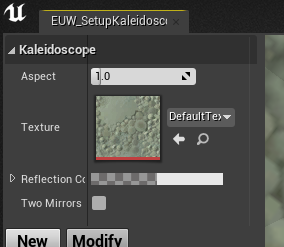 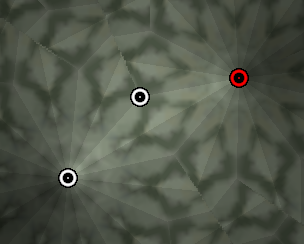 Three mirrors are placed on edges of triangle. 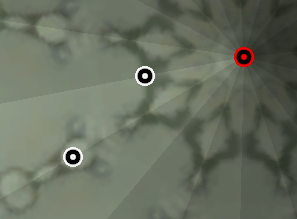 If "Two Mirrors" is checked, two mirrors are placed on two edges crossing the red marker. 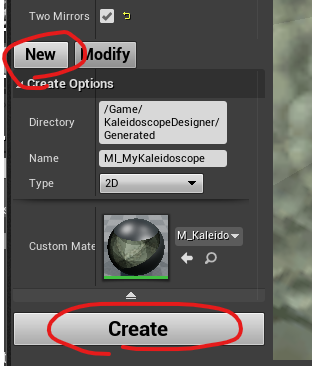 Confirm "New" button is shown with light color (if dark, just click it).

Modify "Directory" and "Name" (if you need to), click "Create" button to generate new material instance.

This sets up material instances for 3DScene/UI(and retainer box) as assets.

See the reference page for details.

Crystal Renderer is equipped with blueprints to create jewel meshes.

It can be used as it is, and extracting mesh as StaticMesh is also possible.

Place "BP_ProcCrystal_RoundBrilliant" on your level and configure parameters.

Wireframe view is good for examine the shape.

Place "BP_ProcCrystal_Step" on your level.

Create "CurveFloat" asset and fill the property "Curve" with it.

Keys between time 0 and time 1 are used to form the mesh.

Interpolation mode should be "linear" through the curve to preview the shape well.

-Values are normalized so that the largest value corresponds the "Radius"